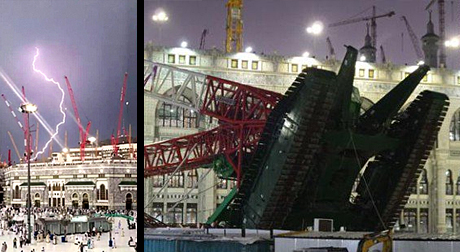 Earlier today we reported on the stunning crane collapse on the Grand Mosque in Mecca, Saudi Arabia, killing 107 Muslims and injuring hundreds, on the anniversary of 9/11.

The stunning and disastrous lightning strike right on that spot led many on Twitter to compare it to another heavenly light — yesterday’s spectacular rainbow from the site of the World Trade Center in NYC.

Well the “karma” angle just got even crazier, according to the DailyMail:

The crane was owned by the Bin Laden family.

The crane belongs to a crane company operated by the Bin Laden family’s consortium, who are heading the expansion of the Holy Mosque.

Pictures taken before the disaster show the crane being struck by a bolt of lightning and authorities are in little doubt extreme weather was to blame.

The crane fell into the east side of the mosque, with the top section of the structure crashing into the roof.

So, to summarize: On 9/11, a crane owned by the Bin Laden family and deployed to a construction project at Mecca, the holiest site in all of Islam, is struck by lightning and falls through the roof of the Grand Mosque, killing at least 107 devout Muslims. What are the odds?

Source: BREAKING: You Won’t Believe Who Owned the Crane That Collapsed in Mecca on 9/11 Anniversary | Top Right News