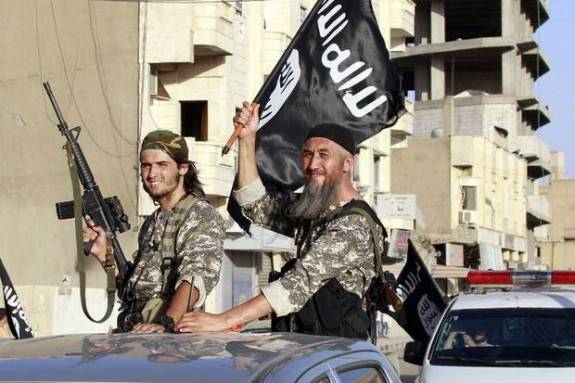 ISIS fighters seized most of al-Baghdadi in Ramidi – where 300 US Marines are stationed training Iraqi Forces.

Al-Asad base is near the city – where 300 Marines are stationed.

UPDATE: At least eight ISIS fighters attacked the base where over 300 US Marines are stationed.

Eight suicide bombers managed Friday to get onto a sprawling Iraqi military base where hundreds of U.S. Marines are training their Iraqi counterparts, but were killed by an ISF counter attack almost immediately.

The US Marines at Al-Asad airbase has been under frequent attack since January.

But today ISIS seized large swaths of the city.

The ISIS linked Twitter accounts are tweeting about the developments.

Iraqi officials say they have lost contact with the base.

90% of town of al-Ramadi is under ISIS control.

Islamic State insurgents took control on Thursday of most of the western Iraqi town of al-Baghdadi, threatening an air base where U.S. Marines are training Iraqi troops, officials said.

Al-Baghdadi, about 85 km (50 miles) northwest of Ramadi in Anbar province, had been besieged for months by the radical Sunni Islamist militants who captured vast swathes of Iraq’s north and west last year.

“Ninety percent of al-Baghdadi district has fallen under the control of the insurgents,” district manager Naji Arak told Reuters by phone.

Militants attacked al-Baghdadi from two directions earlier in the day and then advanced on the town, intelligence sources and officials in the Jazeera and Badiya operations commands said.

The officials said another group of insurgents then attacked the heavily-guarded Ain al-Asad air base five km southwest of the town, but were unable to break into it.

UPDATE: Pentagon says Baghdadi has fallen but no attack at base.

via ISIS SEIZES IRAQI CITY – Attacks Al-Asad Base WIth 300 US Marines Inside – EIGHT SUICIDE BOMBERS Killed Inside Base | The Gateway Pundit.